Click on a thumbnail to view pages. In a browser you can also right-click and select “Open link in a new tab” (or similar) to see a zoom-able version. Close the tab to return here.

Composer and lyricist Stephen Sondheim has more than half a century of award-winning contributions to musical theatre to his name. He is renowned for the startling complexity of his lyricism and music.

Sondheim was born in New York in 1930 to parents Janet and Herbert. His father was a remote figure and Sondheim describes a physically comfortable but emotionally cold upbringing, psychologically abused by his mother (whom he came to detest).

After his parents divorced in 1942, Sondheim moved to Pennsylvania with his mother. He became friends with the son of lyricist and playright Oscar Hammerstein II, who became a kind of surrogate father and mentor to Sondheim. Aged 15, Sondheim asked him to evaluate a musical he had written, to which Hammerstein responded that it was “the worst thing he’d ever seen” – but offered to explain why it was so. Sondheim explains that he “learned more that afternoon than most people learn in a lifetime”. Over the next 4 years, he assisted Hammerstein preparing and rehearsing South Pacific and The King and I.

Sondheim studied composition at Princeton, after which he spent several painful years struggling to get work. Eventually Sondheim was commissioned to write some songs for the show Saturday Night, leading to an audition with Leonard Bernstein, who chose him to write the lyrics for West Side Story. There followed successes with Gypsy and A Funny Thing Happened On The Way To The Forum, which established Sondheim as a rising star of Broadway.

After a couple of notable failures (Anyone Can Whistle, Do I Hear A Waltz?), Sondheim returned to unanimous critical and box office success with Company and Follies, and so was fully installed as a major force and innovator in musical theatre.

Evening Primrose
Take Me To The World (Claire)

Gypsy
Wherever We Go (Ellen, Emily/Hannah and Steve)
Gotta Get A Gimmick (Heidi, Sarah and Erin)

A Little Night Music
Send In The Clowns (Sarah)

Sunday In The Park With George
Putting It Together (Company)

Assassins
Everybody’s Got The Right (Company)

Into The Woods
No-One Is Alone (Hannah, Steve, Stephen and Abigail)
Finale (Claire and Company)

Finale: Merrily We Roll Along
Company 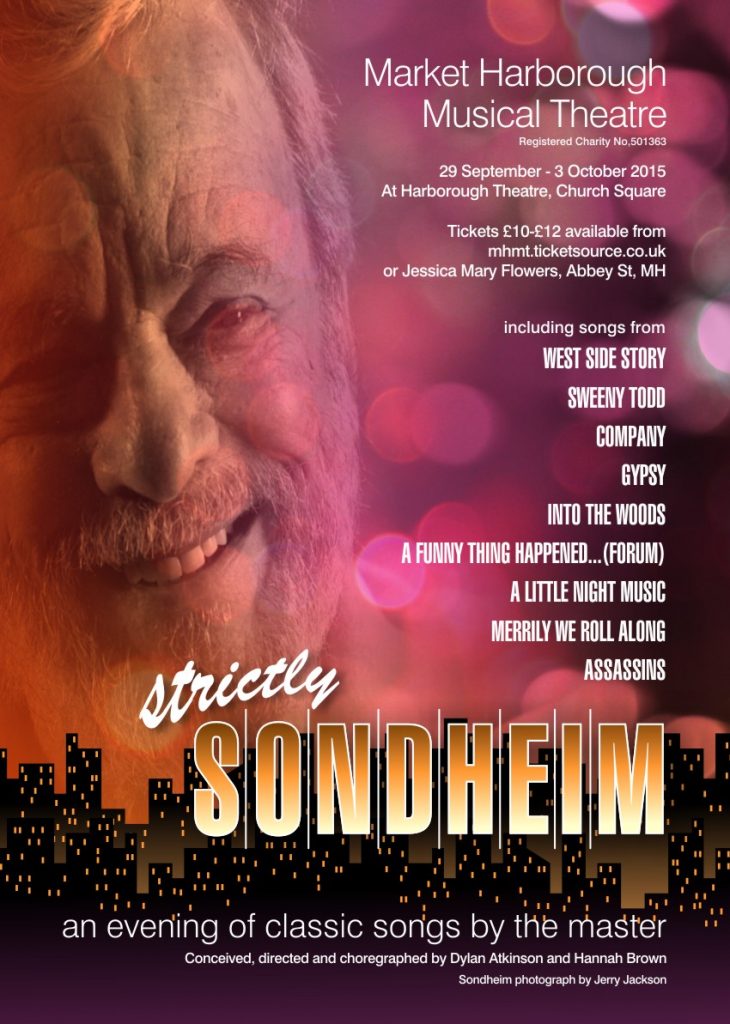 END_OF_DOCUMENT_TOKEN_TO_BE_REPLACED

A delve into our amazing collection of show programmes